The Book Of Mormon Tickets for Sale

We are a resale marketplace. We are not a box office or venue.

Ticket Prices may be above or below face value.

We Guarantee your Tickets Will Arrive Before Event.

All Tickets are backed by a 100% Guarantee. 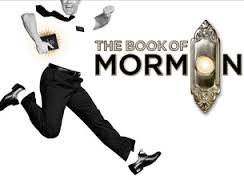 The Book Of Mormon Information

The Book of Mormon

From the comically, twisted minds of Trey Parker and Matt Stone of South Park fame, comes this rollicking and contemptuous look at the Mormon faith and religion in general.

Two young Mormon missionary trainees, Elder Kevin Price (Gavin Creel) and Elder Arnold Cunningham (Christopher John O'Neill) are sent to Uganda to convert the “natives” to their religion. A glaring problem right from the beginning is that one of the duo is a pathological liar, who has not actually read the Book of Mormon and constantly makes things up when he doesn’t know the answer. The other Elder is completely delusional, and entirely disconnected with the Ugandans.

For their part, the Ugandan villagers are dealing with hunger, strife and a murderous warlord who is obsessed with female circumcision. With these seemingly intractable problems, the villagers take to blaspheming and cursing God to make themselves feel better.

After receiving false reports of success by the two missionaries, eventually The Mission President (Lewis Cleale) was bound to visit to congratulate the two on their progress in converting the Ugandans. To his shock, the The Mission President realizes the villagers have been filled with misinformation about The Book of Mormon and outright lies.

As you would expect from a play by the creators of South Park, uproarious chaos quickly ensues!!!

From The Blog
Festicket’s Event Genius Platform Expands With Australia Festival Deals
Justice Department, FTC Announce Settlements in BOTS Act Enforcement
New York Reopening Efforts Plan Deployment of Rapid COVID Testing
Glastonbury Festival 2021 Cancelled as Organizers Look to 2022 Return
Live Nation Manager Says Company Has Laid Off 96 Percent of Staff
Similar Events
2021 © Ticket Charge All Rights Reserved. | Terms
Ticket Charge is a resale marketplace for event tickets. We are not a box office or venue and are not affiliated with these events in any way.